We use cookies to ensure that we give you the best experience on our website. If you continue to use this site we will assume that you are happy with it.Ok

How can I be helped? What’s Psychotherapy?

How can I be helped? ….. Therapy for Anxiety and Phobias.

Most sufferers are desperate to reduce or end their symptoms, and the effects which those symptoms are having on their everyday lives, as quickly as possible.

There are several approaches to dealing with stress, anxiety and phobias. The main categories are:

Careful assessment and diagnosis for each individual is needed to determine the most effective whichever route is under consideration.

I provide Psychotherapy  for  Anxiety Disorders and for Phobias – this does not involve the use of drugs ( but which will be described for completeness and because of the frequency which they are prescribed) .

Psychotherapy is the art or science of using language to alleviate psychological suffering.

Words and the images and the emotions they invoke are powerful indeed but the most important are the words you speak to yourself.

I tailor my specific therapy based on the individual nature of my patient/client and the type of condition they are presenting with.

The principle I personally have always tried to follow is best summarised in this quote:

“ The problems the patient brings to therapy are problems in living.

Living is not an esoteric subject, and no one is expert in it.

The Psychotherapist is no more an expert in living than anyone else.

What psychotherapists should be expert in, is making relationships with people,

Anthony Storr -The art of Psychotherapy.

ANTHONY STORR -The Art of Psychotherapy

Irrespective of which particular treatment approach is adopted, there are common patterns governing what therapists actually do and how they approach therapy.

The most effective therapists are non-judgemental, empathetic and seek to empower the person and their own strengths. This is what I aspire to do in my therapy space.

There are several different schools of therapy each with their own underlying understanding of the symptoms which people are suffering, but some of them have diametrically opposite beliefs and yet each with competing claims as to effectiveness.

I draw from several main schools of thought, based on my personal experience, training and the results I obtain.

As such I classify myself as an eclectic or pluralist therapist since I do not limit myself to following only one particular system.

There are very many ways to categorise the models which guide what individual therapists follow. I’ll summarise the main systems very briefly and which may serve as a starting point for those that would like to explore the subject in more depth.

Sigmund Freud (1890’s onward) evolved the concept of the human mind as having two components. The ‘mind’, which we are all aware of, he termed the ‘Conscious Mind’. A much larger underlying element he called ‘the Unconscious Mind’. It was not generally accessible to ‘thought’ but drives many of our emotions.

Freud conceptualised the mind as being rather like an ‘iceberg. The conscious mind – of thought, language and reason, and in contact with the outside world was a smaller component. The greater part was below the surface. It held our instinctual drives for self-gratification (the Id, operating on the ‘pleasure principle’) and our moral beliefs and controls and value judgements (the Superego). These were balanced by an Ego component which mediated between the conflicting pressures and arrived at compromise (the Reality principle)

This was a major breakthrough and led to him developing a whole meta-psychology to explain human behaviour and psychological problems. 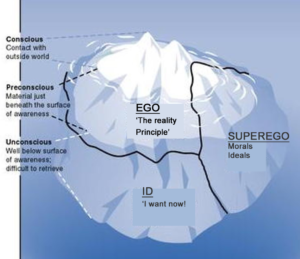 A fundamental tenet of his work was that through observation, discussion and reflection a patient/client would come to understand how past events and current emotions influenced their present behaviour and this ‘insight’ would lead to reduced symptoms and positive changes.

These concepts are still useful today but are most commonly employed in longer term therapies which address a wide range of issues, centring on ‘character’ and personality.

Behaviour Therapy (1920’s onward) was a major reaction to Freud’s ideas. It drew on animal observations and how behaviour could be ‘learned’ and modified by ‘Conditioning’, for example, by reward or punishment. (Dog owners note!).

Behaviourists put forward that all behaviours are acquired through Conditioning, which occurs through interaction with the environment. An individual’s response to environmental stimuli will determine their particular responses.

As the ‘Unconscious’ mind could not be directly observed or measured, its influence was disregarded or denied by many Behaviourists.

A most important step forward was made when Wolpe (1950’s) paired relaxation (produced by Hypnosis) with gradual exposure to a feared situation of slowly increasing anxiety. This ‘toe in the water’ approach or ‘Counter-conditioning’ was very successful, particularly with Phobias.

Counter-conditioning is the standard approach used to successfully treat most Phobias.

Cognitive scientists studied how we understand the world around us and particularly how our brain takes in, interprets and responds to external (and internal) sensory information, such as sight/sound/touch/smell, and learns from them.

CBT therapy has a much greater accent on thought processes, attitudes and inner mental images rather than just the behaviour itself.

Anxiety was interpreted as an adaptive mechanism intended to be protective. It was experienced when an individual’s perception of a threat was greater than their personal perception of their own ability to cope.

Cognitive therapists (eg Ellis) concentrated on how individuals ‘understood’ or misinterpreted past events and current experiences. They actively identified ‘irrational’ or unhelpful beliefs and showed patients/clients methods to change their misperceptions, rationally re-evaluate and so change their thoughts and hence behaviour.

Later therapists (eg Beck, Clark, Young) drew on this work and integrated thoughts and cognition with behavioural elements. This became known as Cognitive-Behavioural Therapy, CBT, but which  is now an ‘umbrella’ term covering a multitude of spin-off therapies.

A key factor is that CBT is generally a time-limited therapy of approximately 5 to 18 sessions and achieves measurably good results in many anxiety disorders such as Panic disorder and PTSD.

Schema therapy was a particular development of the CBT approach of Beck by J. Young in America. It focuses on the effects of upbringing and early experiences on current issues. It systematises the understanding of a core set of needs, which we all have, and the issues which arise if they are not met.

This approach is a powerful way to promote change in people experiencing repetitive negative feelings and behaviours affecting their lives.

Hypnotherapy is not a therapy as such in itself. It is rather a powerful platform which uses the unique attributes of the state of Hypnosis to enhance other therapeutic approaches.

Hypnosis can change all aspects of perception and memory. I frequently integrate hypnotic methods for those patients/clients who show a good aptitude for experiencing and learning these phenomena, in accelerating treatment.

We have some knowledge of the neurobiology of anxiety and the brain centres and pathways involved. Tranquillisers and some anti-depressants act by affecting those systems.

The most common are Benzodiazepines such as Diazepam (Valium), SSRI’s (Selective Serotonin Re-uptake Inhibitors) and ‘β-blockers’ which counteract the actions of adrenaline. They may be helpful, especially in the first instance, and should not be discounted. It is unfortunate that they appear to be somewhat overprescribed and do not attempt to deal with the underlying issues or promote self-involvement with dealing with symptoms for long-term solutions.   READ MORE